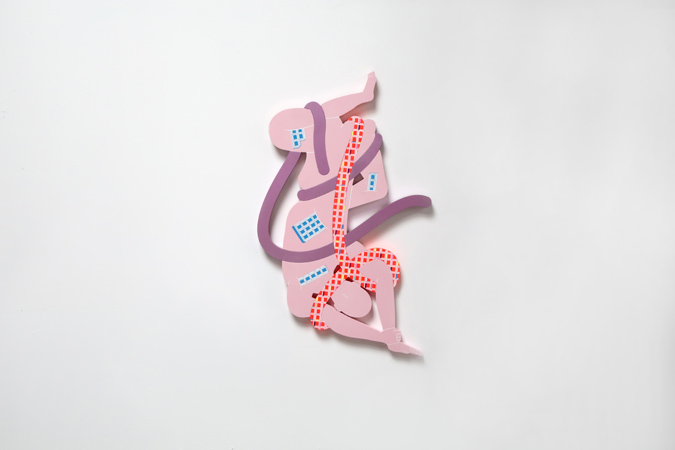 Mark Whalen has again produced a show that responds directly to the contemporary condition. There is a lot of constriction and grappling in this series. The figures in the paintings are engaged in what seems like a form of existential struggle. To add to this disconsolate and sober feel many of the works are clearly bureaucratic in tone where figures are collected in office-like open plan spaces but remain alienated.

Previously Whalen has peppered his worlds with orgiastic carnivals. The LA lifestyle (its pools, pot plants and bedroom antics) seems to be the backdrop for Whalen to ask questions about the society. He responds to the strange conundrum that we live in where our traditional authority figures are now weak and everything is not only allowed but (via the mass commodification of everything) actually encouraged. Paradoxically though it is a world where we are post-sex, post-desire, post-taboo; where everything is allowed as long as it’s not actual sex, desire or taboo. Whalen’s work accounts for this hyperreal, faceless nature of things.

This work no doubt extends this exploration. The exhibition sums up a contemporary anxiety, that you see not only in art but also in fashionable dressing or other activities connected to our identities. How do we on one hand speak in a language that is largely acceptable and social but at the same time stand out?

It is a balance between transgression and compliance (in more psychoanalytical language) or (as Jean Baudrillard would have it) between autonomy and submission.In this show then there are a number of different analogies of this tension, of trying to free yourself from a bind but ultimately never actually allowing for full extraction or freedom. It is up to the viewer to see if the images are in the end hopeful or not.

The artistic language Whalen uses is bright and high key, like the desiring machine of advertising and popular culture. The relief paintings only heighten this fetishisation of the object (rather than merely representation). In Whalen’s hands the glossy surface beautifully juxtaposes its more serious intent.