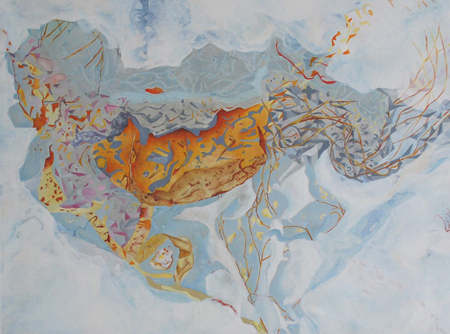 Zoe MacDonell’s latest exhibition Antarctic Fragments, was result of two residencies. She was a guest artist of the Mawson’s Huts Foundation, who are responsible for the conservation of Mawson’s Hut in partnership with the Australian Antarctic Division. It is a great honour for anyone to visit Antarctica, and there is a quota on visitors; part of the duty of this residency is to image the landscape, to report back to those that haven’t and won’t see it at first hand. Back in Sydney, MacDonell further developed the work in the Studio Residency Program at Artspace Visual Arts Centre, Sydney.

This work has evolved from my time in that remote and otherworldly place. These paintings depict fragments of once living matter frozen in suspension within the ice. Illuminated by a prolonged light at the continent’s melting edge, these small, estranged objects appear irrelevant to the vast landscape. Their singular and disconnected nature rendered them both strange and striking. Their decay radically slowed, these abstracted remains of life reveal a disconcerting beauty that speaks of a profound sense of aloneness. They seek to capture a sense of Antarctica’s stillness and silence.

In trying to capture the objects trapped in ice, it is as if the snow has become the painting teacher. The ice and snow behave like layers of paint creating areas that are variously transparent and opaque; liquid and solid; with crisp contours and modulated blurs. In capturing the qualities of the landscape, close up, MacDonell has also experimented further into the limitations of painting, of abstraction and realism and the power to capture and hold a moment.