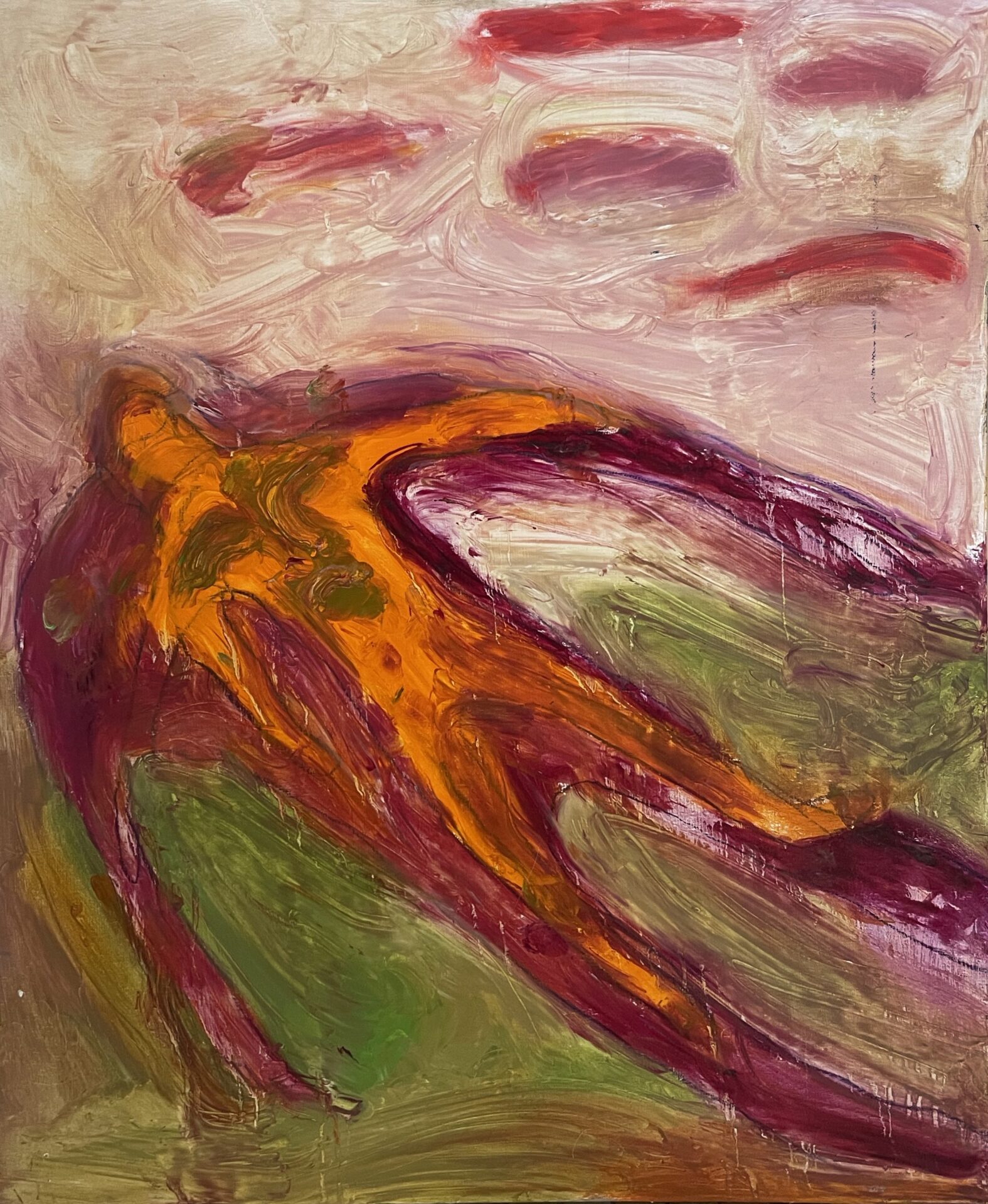 Deep into the night, I imagine waking in a dream state. Wandering through the house, objects glow from dark corners. Beyond the front door, alongside the streets, rose bushes are incandescent; the playground is empty and animated. This is the kind of journey my imagination meanders through when experiencing the work of Claudia Greathead. A clock tower, moths, mysterious cabinets, a small dog crop up and reappear. With these Greathead creates her own symbolic language. She refers to them as anchors. Anchors that provide softness and strength.

Pancakes and the Clock

At first, I’m drawn to the eponymous painting. When asking Greathead about it she says, “This is a painting of my dog Pancakes, as a clock tower. The clock face is kind of morphed into her face”. With love and adoration, she speaks of the clock tower and Pancakes, how they are both stable and constant: the clock’s measured ticking and Pancakes comforting aura. They bring solace and are the backbone of the exhibition.

I like to contain – there is a sense of containing feelings or things that represent feelings. The artist expresses this sentiment when acknowledging the glass shelves displaying obscure objects. These items are based on sculptures of orchids from her previous exhibition. The exhibition was about her father, and she was recreating his orchid garden. For Greathead, painting is a way of contemplating barriers. By creating cabinets and containers she can process memory and thought. In ‘Glass Home’, the strokes resemble the markings of a court; a world confined to certain parameters. But glass is portrayed for its elusiveness – the point where background and surface meet is often imperceptible and Greathead utilises the fluidity of paint for its ability to manipulate rigidity. Through its softness, line can fade away to blur boundaries. The artist’s negotiation of spacial limitations recalls the late American painter Forrest Bess who created his own intensely private symbolism which he structured along boundaries between interior and exterior, earth and sky, material and mystical. Most of Bess’s images were derived from dreams, and he was influenced by Jungian ideas of the unconscious. Jung once wrote, “As a plant produces its flowers, so the psyche creates symbols”.

Sometimes (my) body is a container in painting and sculpture. The enigmatic work ‘Looking Up’ depicts a surreal turquoise figure set against a smooth fiery backdrop. Greathead tells me many of her paintings are self-portraits or mirrors. They are mirrors reflecting not superficial surface but the workings of the psyche. Like dreams, her paintings are a string of unfiltered images allowing us to explore places we dare not go in consciousness. Her interest in Gestalt Therapy assists in uncovering these narratives. Gestalt therapy, founded by German-born psychoanalyst Fritz Perls, stipulates that individuals cannot be considered as separate from their environment and the two are inseparable in the treatment of anxiety and unease. Greathead’s work confronts the self or the metaphoric self (seen in figures like the moth), existing within a particular landscape. A comparable exploration of psychic space in relation to the body can be found in the ‘Red Room’ in the television series Twin Peaks (1990-2017) created by David Lynch and Mark Frost. The room, situated somewhere between dreaming and waking, is a space where Lynch explores idea’s relating to the subconscious and its correlation to the truth. Things are recognisable but hard to locate. In Greathead’s painted world as in the ‘Red Room’, truths can be obtained. But while Cooper, the protagonist, comes closer to the answer it proves difficult to extract. Words are unclear, things aren’t as they appear – secrets reside here. Greathead work maintains a similar ambiguous energy.

The moth (mentioned earlier) is a creature the artist identifies with. She ruminates over its tendency to hide through mimicry and points out the eyes on its wings. She finds its desire to protect itself in this way comical. But the moth is also attracted to light; to exposure. Light beams on forms and illuminates darkness in Greathead’s work, whether it be the moonlight touching the ocean or the green lustre of a candelabra. Her palette is rich and vaguely iridescent like a Midsummer Night’s Dream if it were captured with a paintbrush.

There is great warmth in Affecting Clock Tower. A feeling of safety in the presence of these nocturnal and enchanted psychological landscapes. The dynamic gestures, whirling tones and recurring characters brim with fervid force. They let us dream while we’re awake. 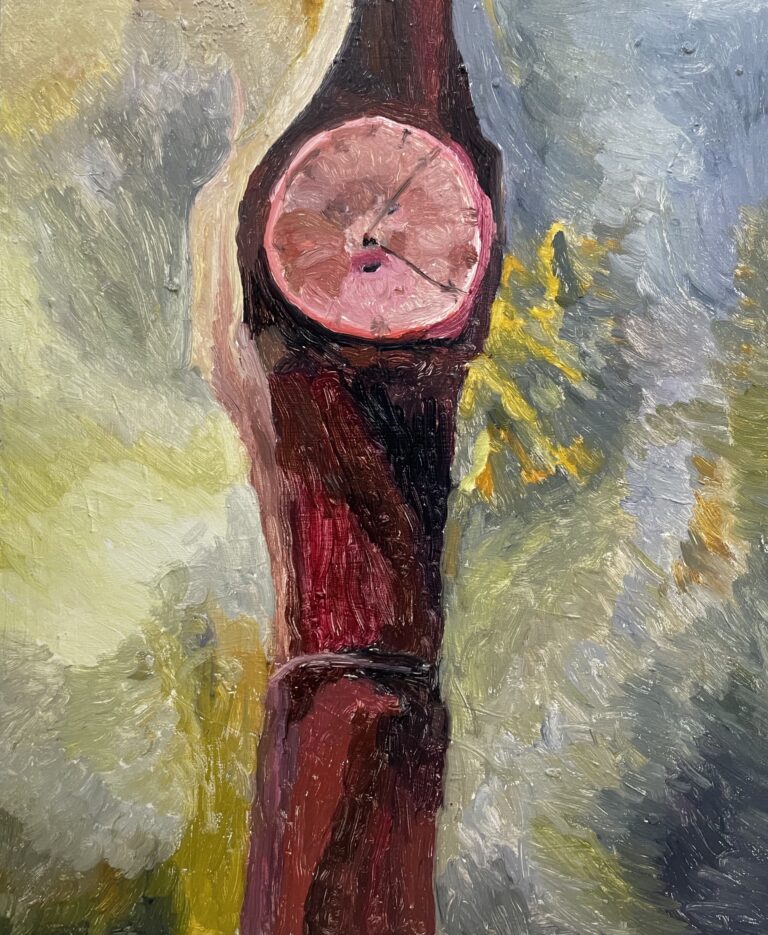 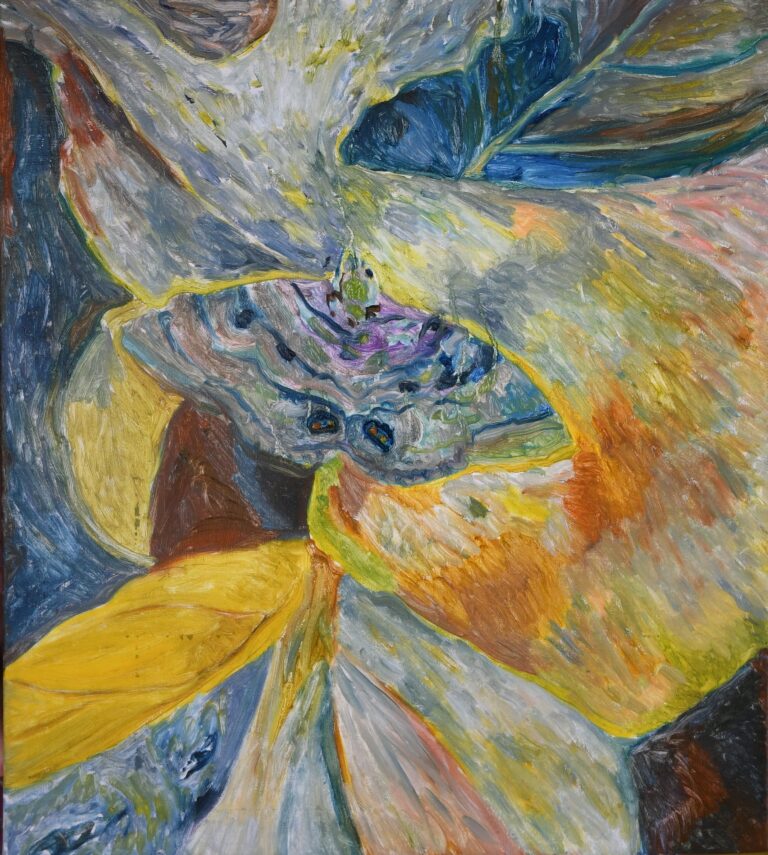 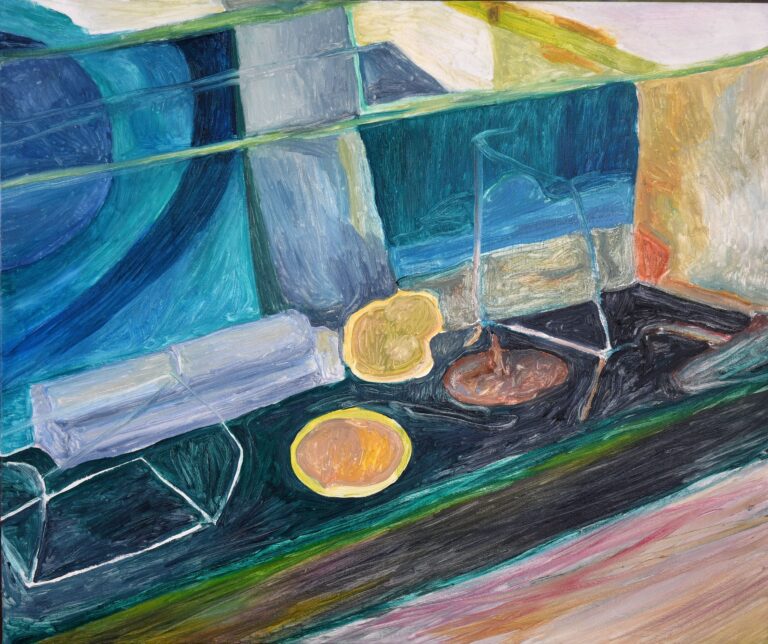 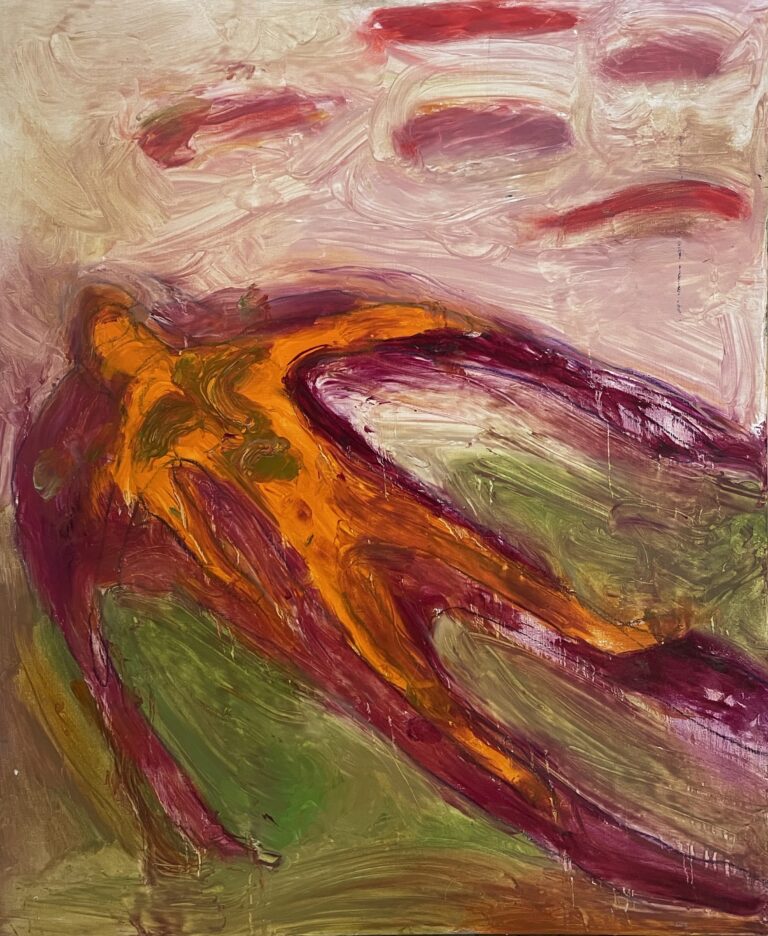 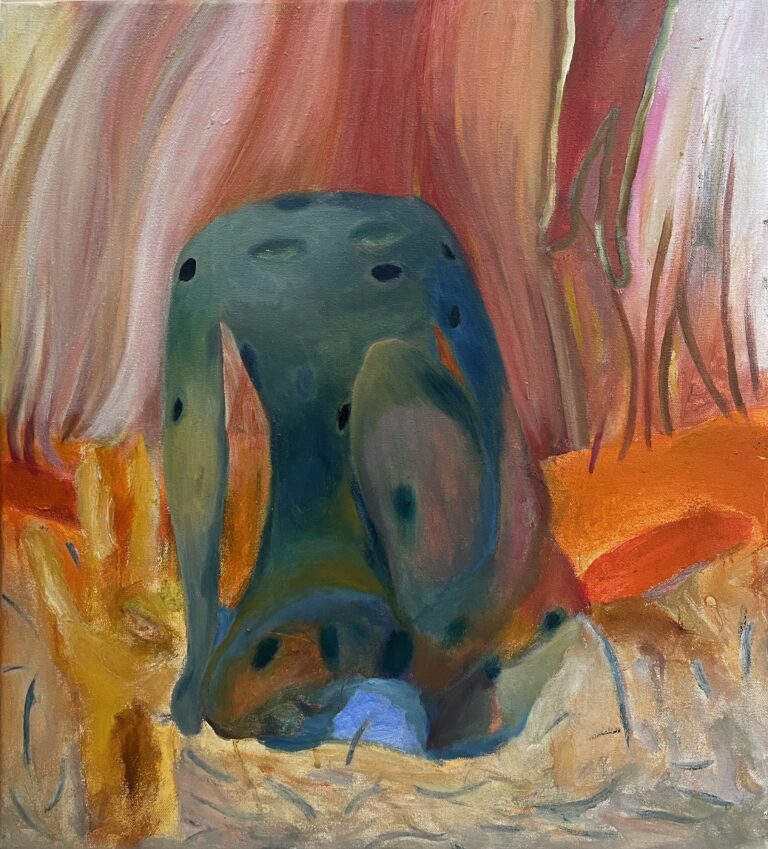 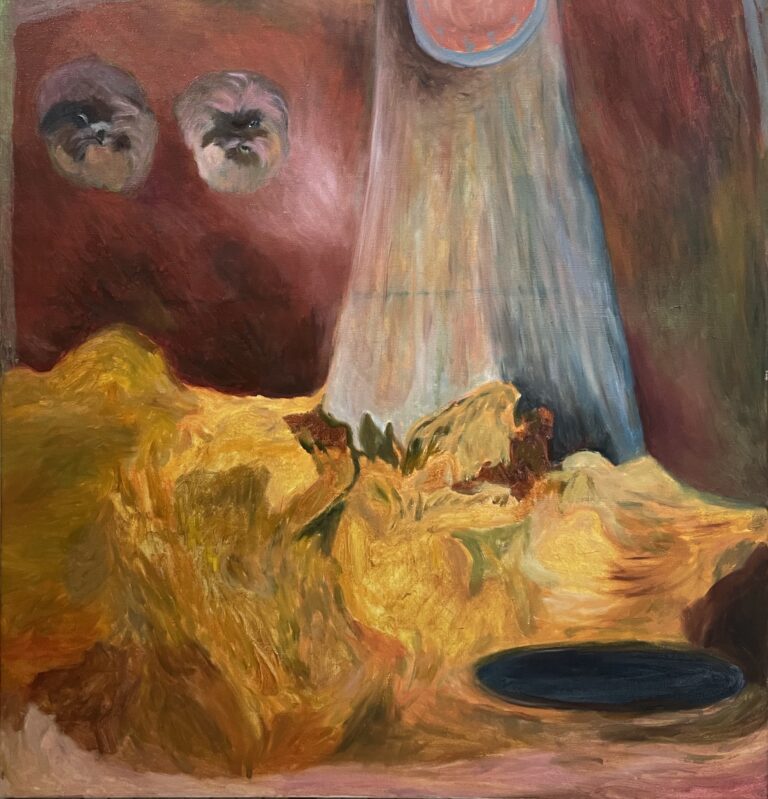 Pancakes as the Sun and Moon 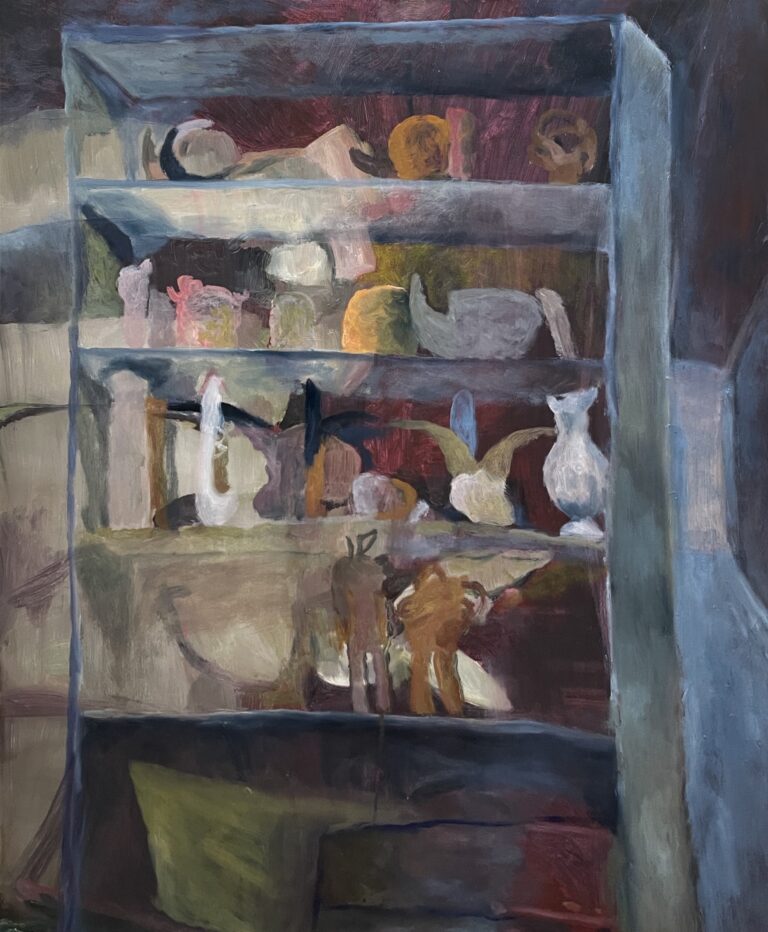 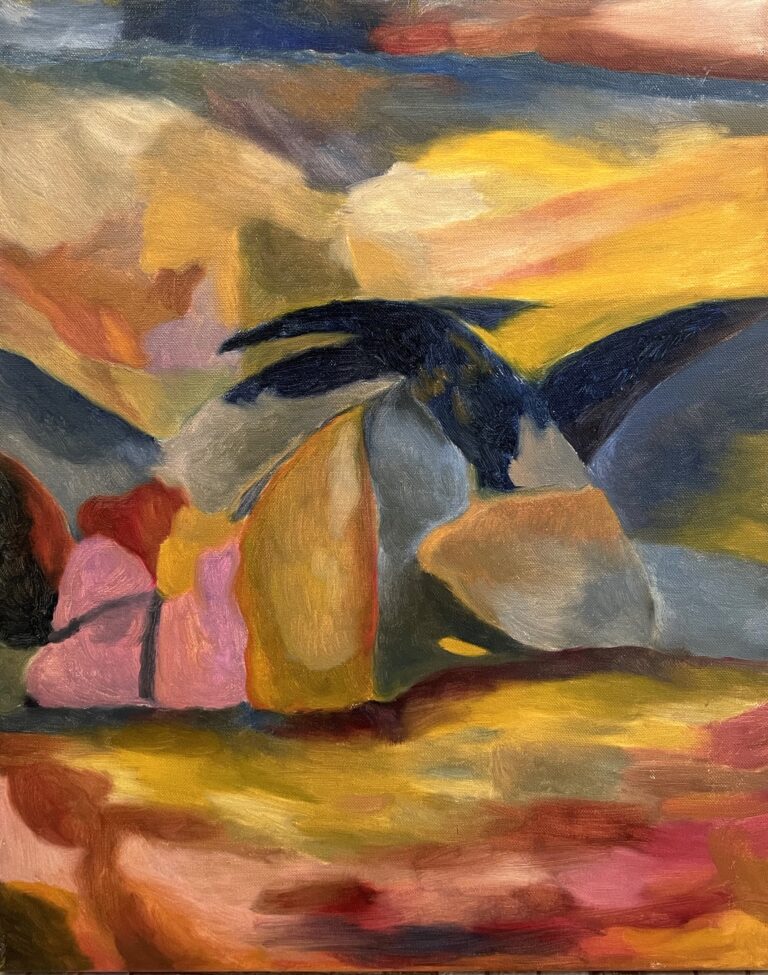 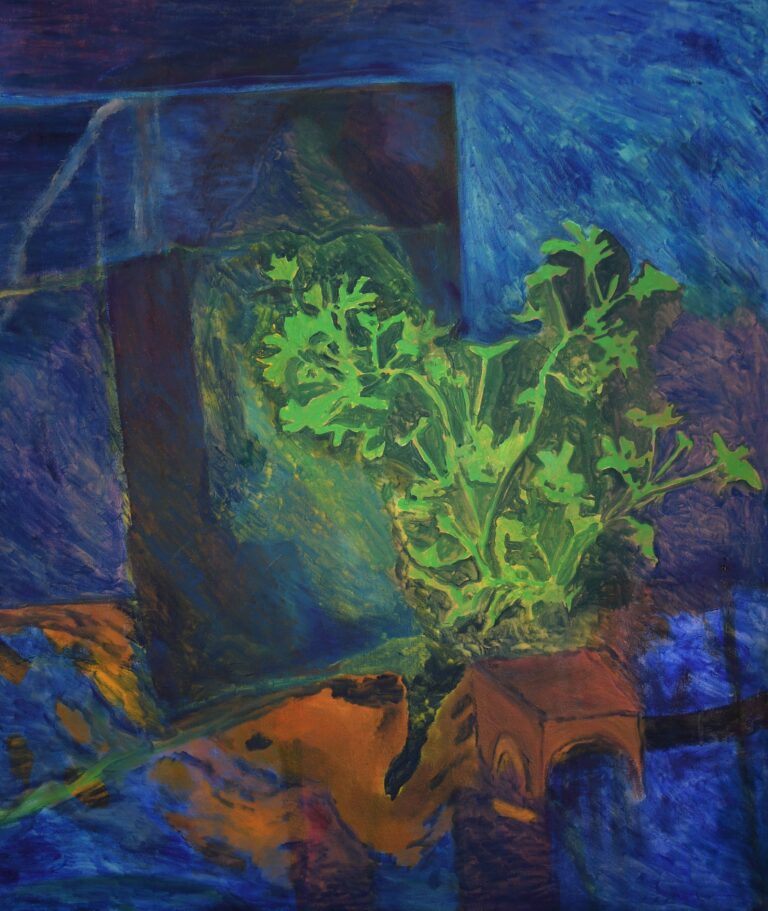 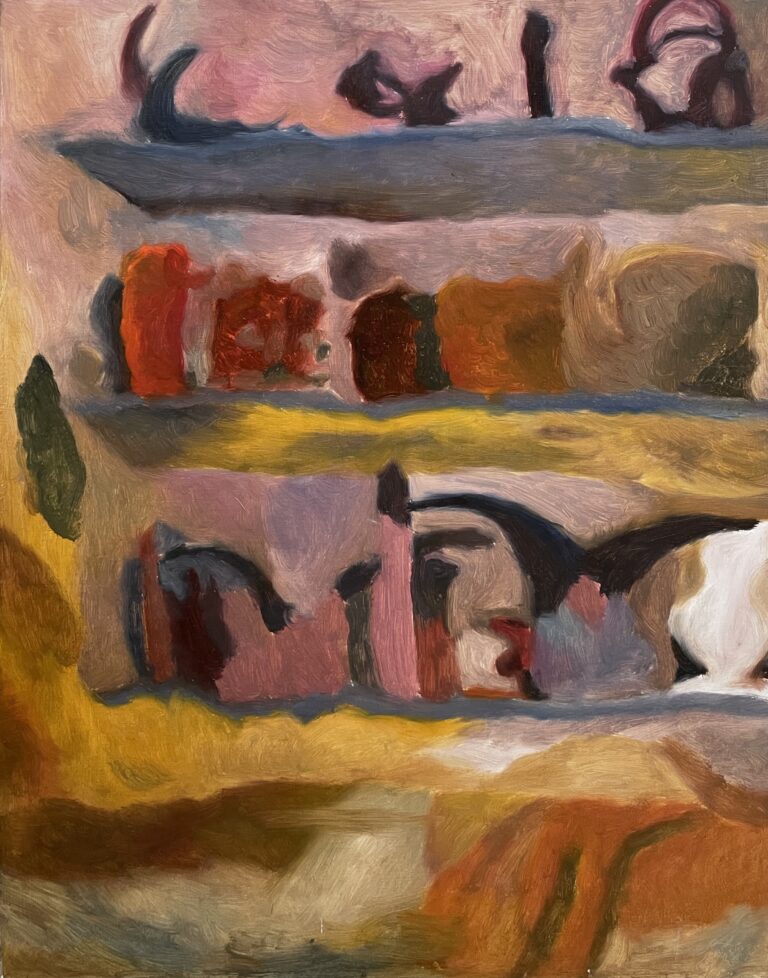 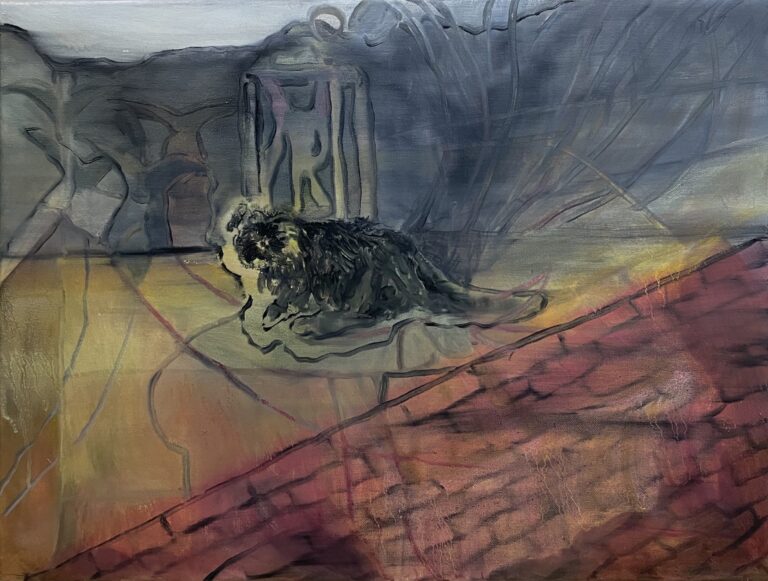 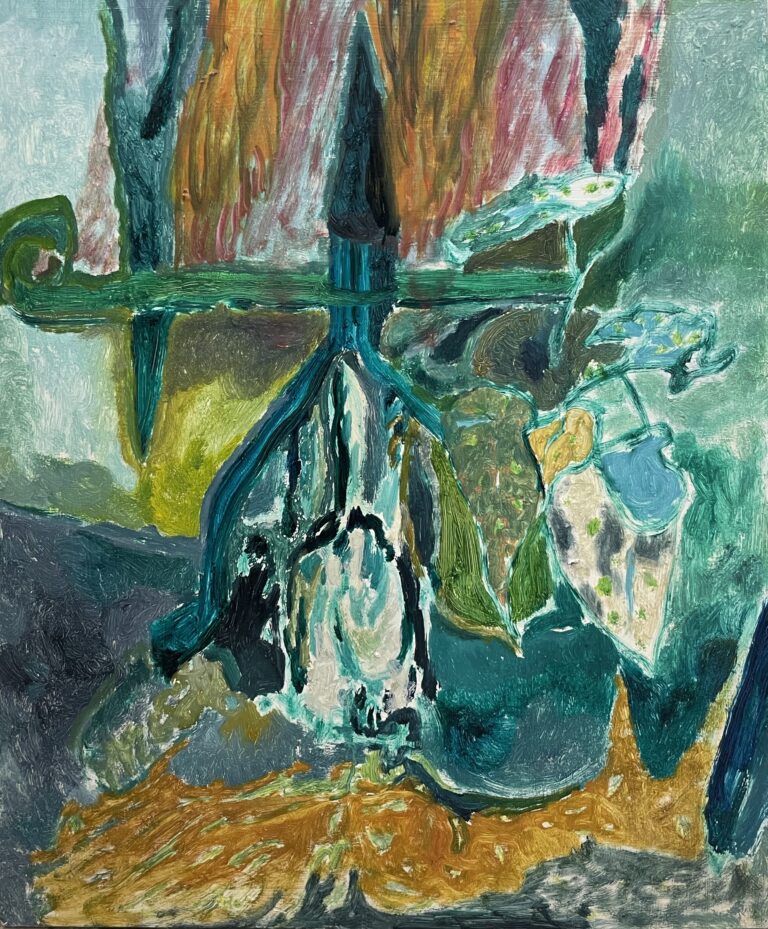 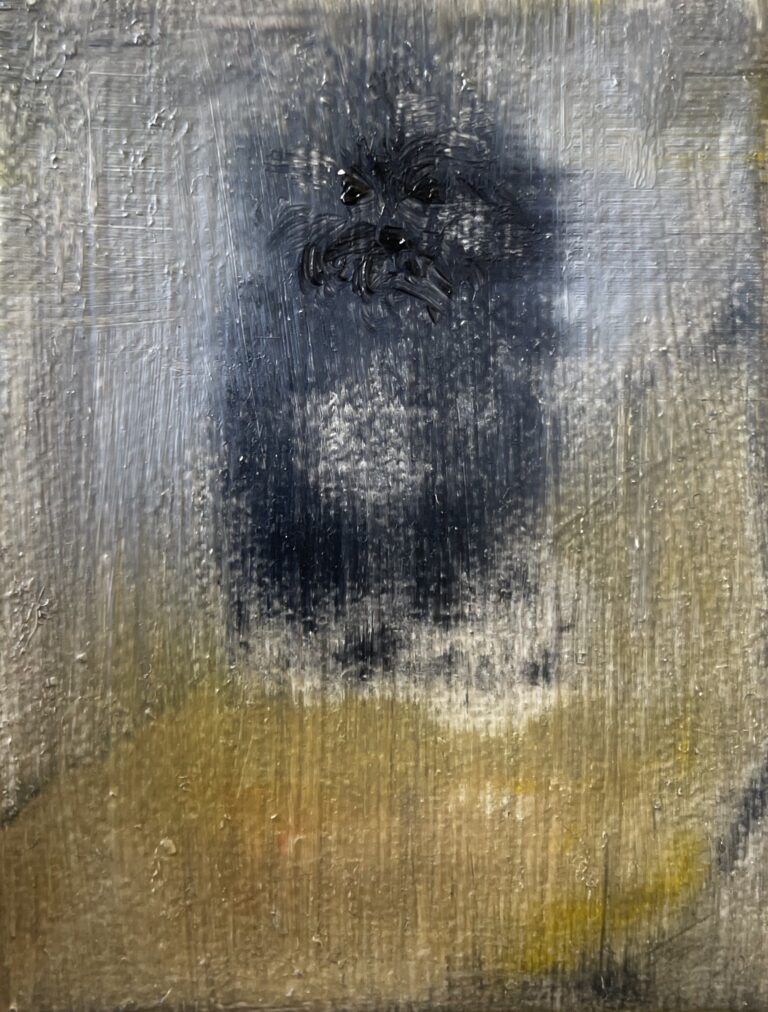 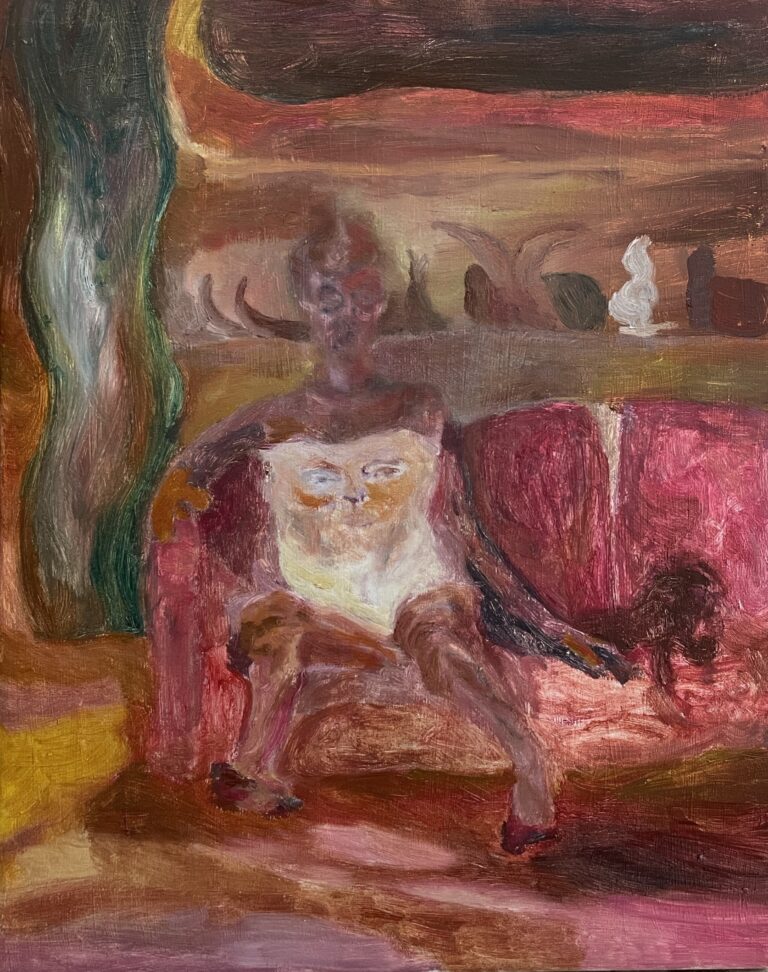 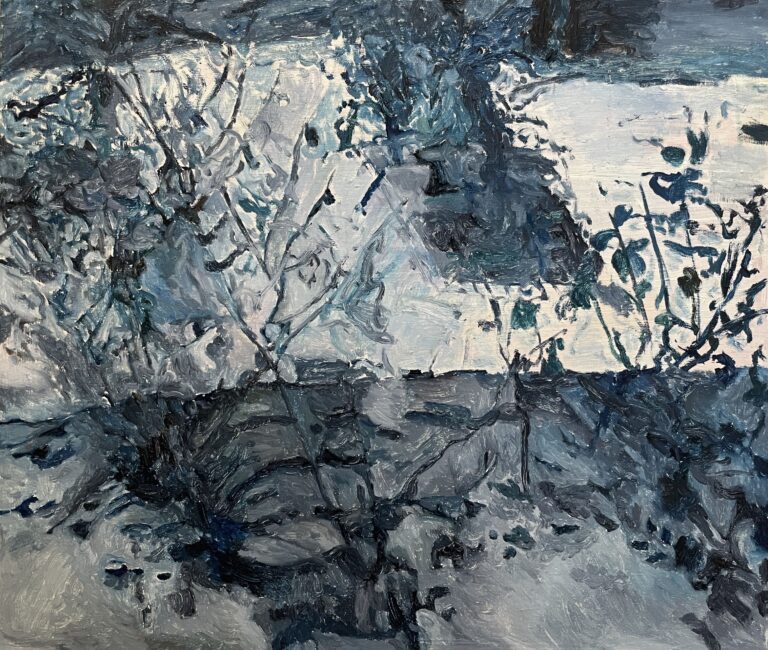 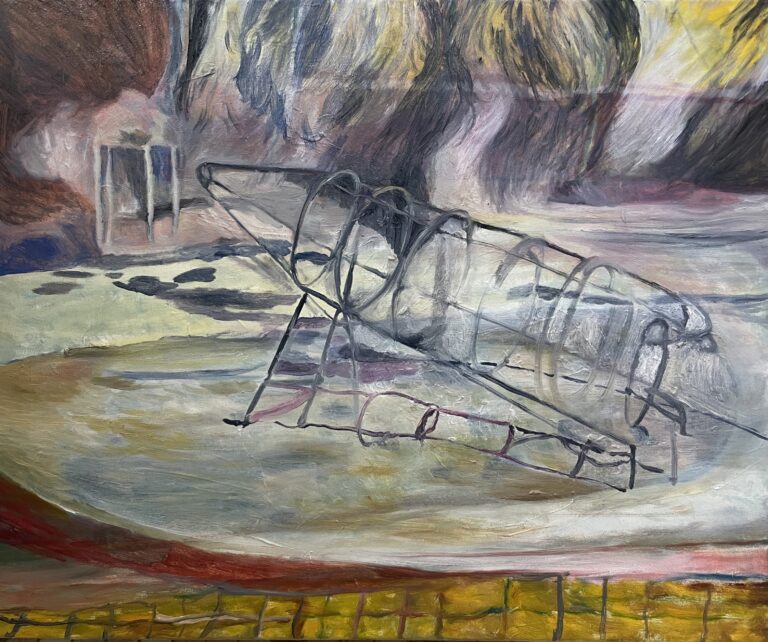 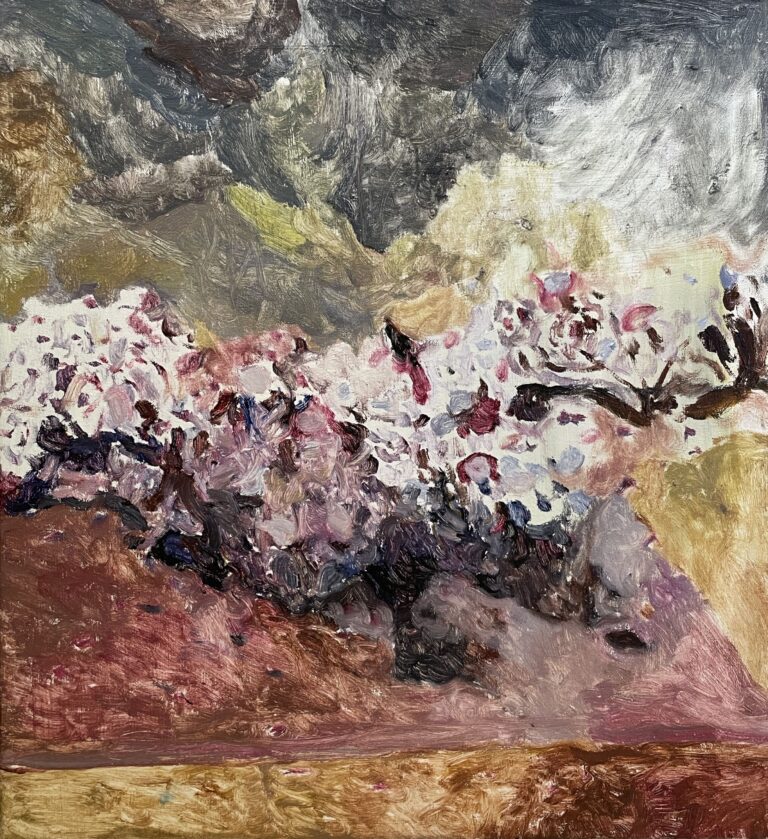 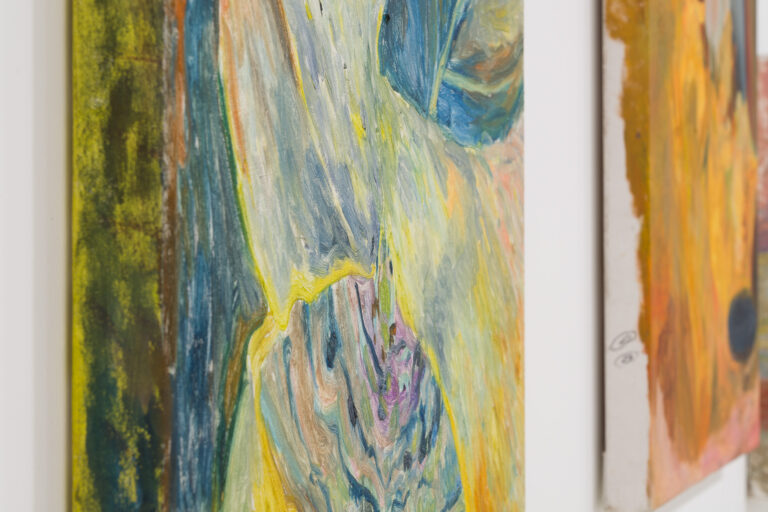 As A Moth (detail) 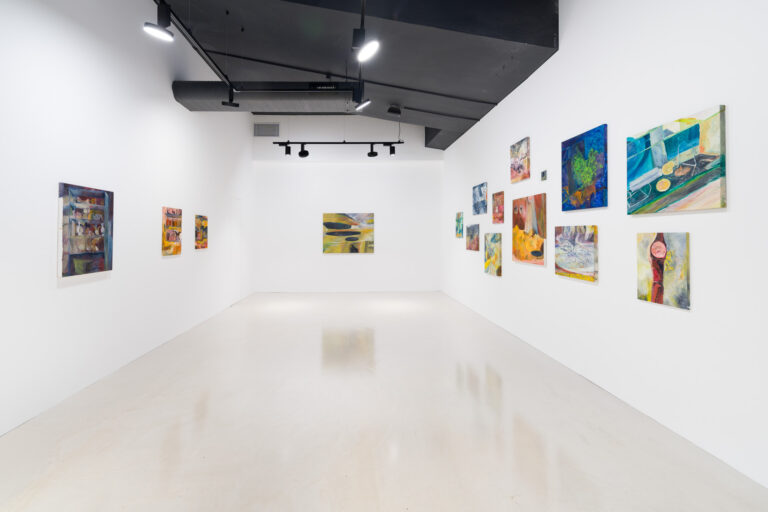 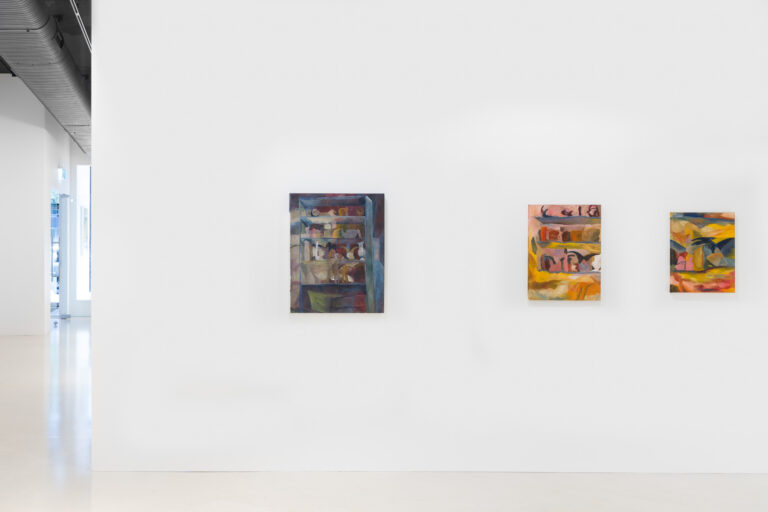 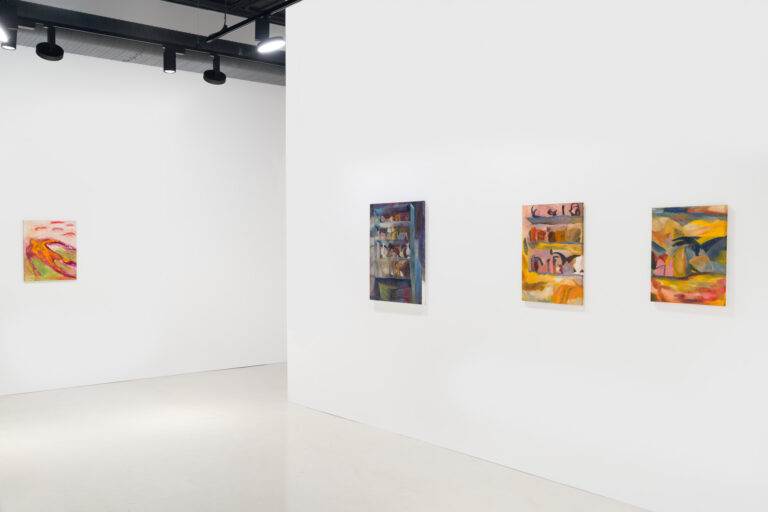 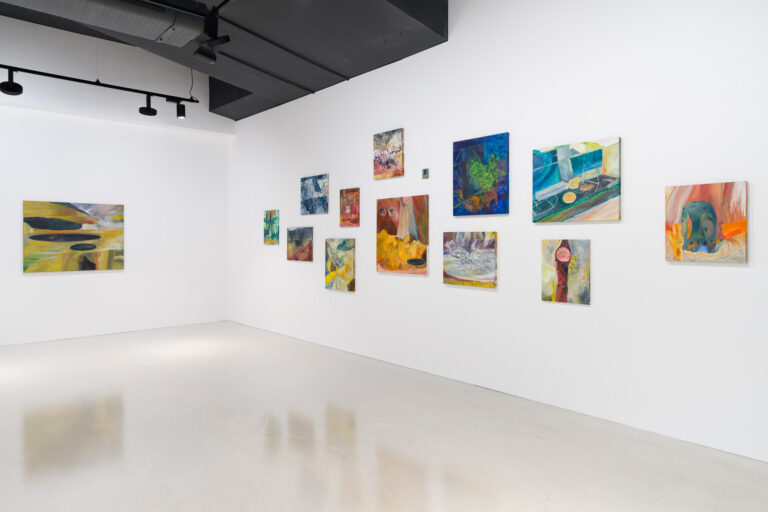 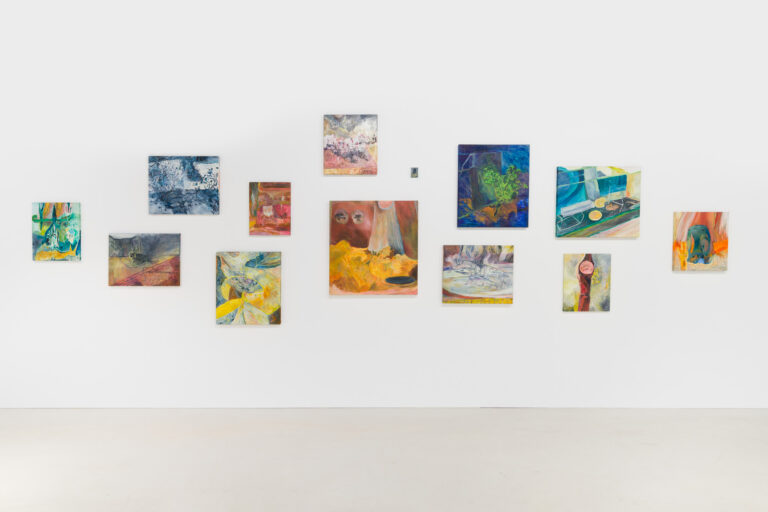