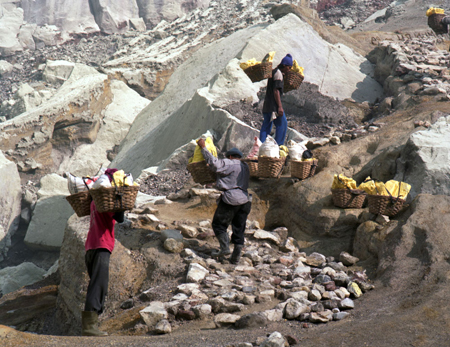 A Song for the Stone-breakers

A Song for the Stone-breakers is a video installation capturing the working environment of sulphur miners in Kawah Ijen, Indonesia. The work observes the ongoing confrontation and overwhelming tensions in working conditions in Kawah Ijen, Indonesia focusing on the risks and consequences of work in situations where conditions are almost impossible. A song for the Stone-breakers questions the ideas and notions of repetition in manual labour including the universal tension drawn out between humankind and the environment, the related psychodynamic tension that hides in the mankind’s awareness of his fragility in the face of natural forces. The interests are in the dual themes of risk and futility in what I call ‘the dark, Faustian side of human nature in the will to contain what it cannot contain.’

A song for the Stonebreakers focuses on environmental hazards; the work emits a sense of vulnerability and threat. The title of my work also reveals a process of thought on the part of me being a artist: it suggests a narrative, which, by virtue of being withheld, is intended to draw the viewer into a place of reverie. The title additionally reflects on Gustave Corbet’s 1849 realist masterpiece The Stone Breakers. In the video artwork the footage of the uncanny location in Indonesia is juxtaposed with a succession of imagery of sulphur miners using primeval excavation methods in illegal mines in the Indonesia. Where workers suffer the perils of neo-imperialism and profiteering multinationals a tension in the work asks the observer to query what may lie beneath the surface, to explore unknown territories, unrestrained nature and the consequences for mankind. In this particular work I am reflecting on a sobering subject matter but allowing the viewer various states of contemplation and deliberation. 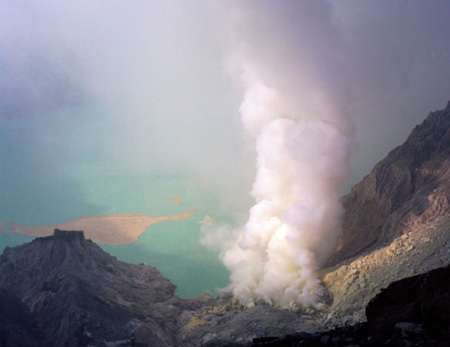 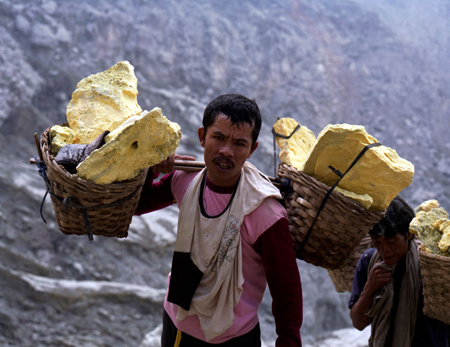