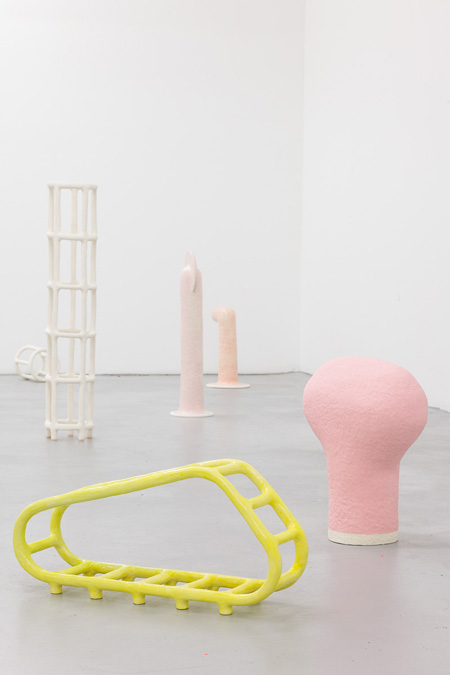 On seeing Addison Marshall’s ceramic installations, one student embarked on the Herculean task of explaining to another what exactly it was that lay before them. After a deal of mental gymnastics, they uttered: “it’s a kind of thing.” Addison Marshall A Kind of Thing elicits introspective tensions, his ceramic anthropomorphized appendages extend into space, and they pose a visceral manifestation of a hanging question.

Bloating and whirling, the shapes sign toward attempted functions superseded by aesthetic proposition. Like a brilliant utterance, the appeal of the installation truly derives from a most Kantian place- the sublime. This sublime and utopic substance is foiled before ever reaching didacticism; it becomes coded by multiple narratives. For this is not a Barnett Newman Broken Obelisk, a moment of illusory achievement at only two apexes- rather, the achievement lies in initiating the plural possibilities and tensions of existence.

Marshall’s hand-worked lumps of clay are loaded with aesthetic qualities that reflect his work with fashion and these influences mirror in the form. Dimensions of texture spring forth from the surfaces and the colored glaze, pastel whites, pinks and yellows are poetical in their minimalism. The medium itself leans toward intimate creation whereby the artist is physically invested with his own hands – as opposed to a cast or mold which is closer to automata. Yet the automatic is almost present in the semiotic vacuum that the formal qualities leave behind, a sense of unconscious expression echoing right back into the hollows of the clay. Similar narratives of the auto exist in the fashion industry, a search for the personality of the crafted versus the manufactured, a frustration of technological progress.

Objects themselves are elevated to status of subject in the artist’s perspective, as though casting out a playful ceramic pipe-cleaner and calling it Auntie Emily. Names such as ‘Submission,’ reflexively dig at human and institutional ideations before an audience has time to decode the form. For example, resemblances of ladder rungs, a shape formation that signs function, circle and finish at dead ends. One ladder piece has caterpillar like feet to maintain balance, the evoked function surpassed by its own need to sustain itself. This obsolescence animates the creations into the light, beyond a heavy and non-relational obscurity where object, not subject, goes to die. Tying that to humanity; the ambiguity of what it means to be human from an internal point of reference allows the forms to be free.

The series is ultimately concerned with creating a momentary contemplation, a tableau of Kantian play, a self-addressing form al la Greenberg. Ceramics in particular have a specific tradition that, as the artist states, is the discipline in which the function objects: plates and teapots and ‘dumb shit’ have reign. Ceramics has seen a resurgence with experimenting artists like Addison who seek to redefine perceptions of the practice, what is done, in institution and exhibition – through the fascinating mysteries of non-function, awkward appendages and all.