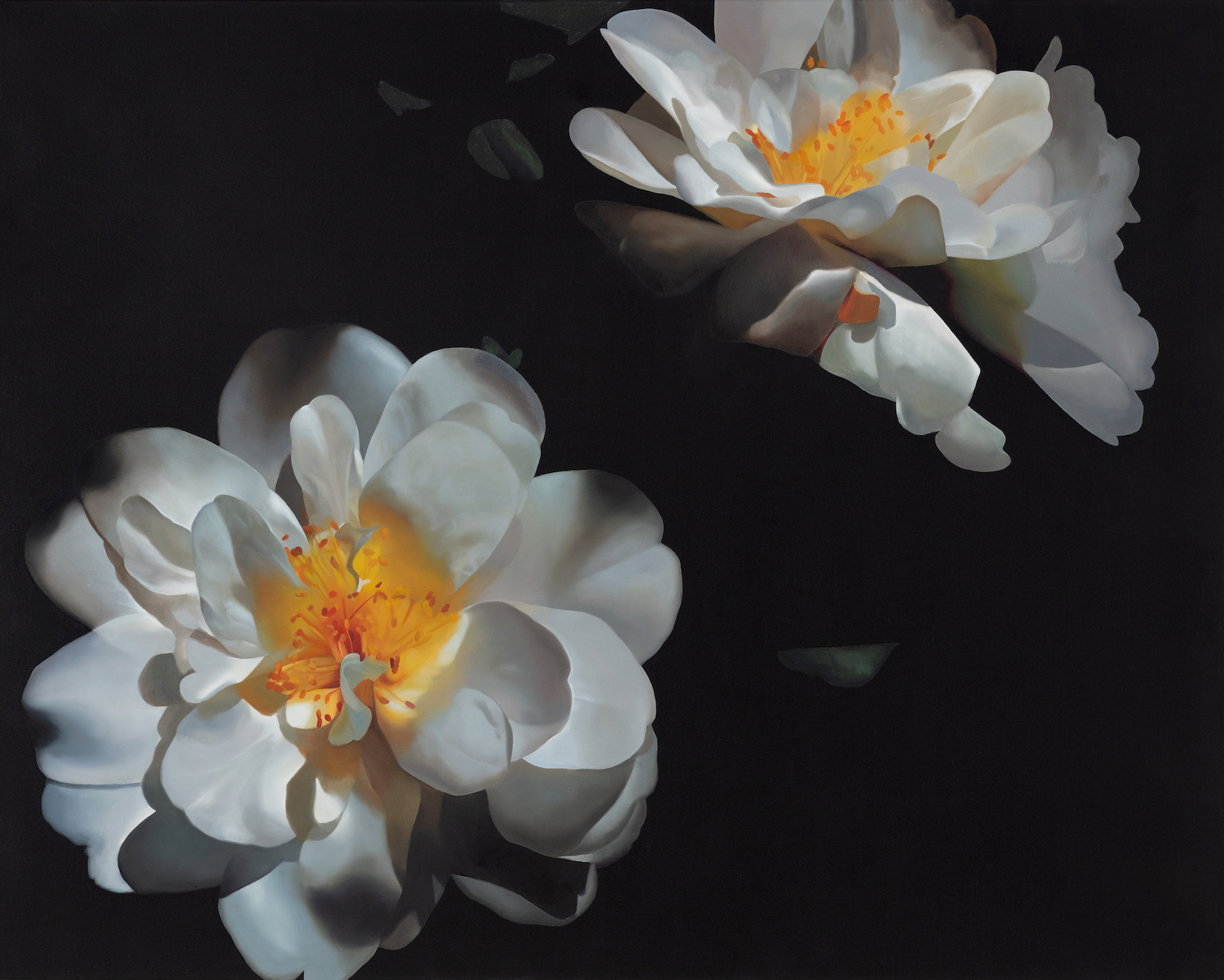 To layer is to spread substance across surface – matter overlaps with matter. In horticulture, to layer is to propagate – the plant is provoked to revitalise segments that have been made absent, from parts that remain attached to the parent plant. For air layering, a branch is lacerated, its deep wound is bound with earth, to be kept moist until its roots are developed, until the branch is again severed – uprooted in transferral, to be renewed in growth once more. Alicia Mozqueira’s oil paintings are emblematic of this intensive labour, a practice of propagation, in which each layer of oil paint engages its preceding layer to impart petals that unfurl into an everchanging interplay between light and shadow. Throughout Mozqueira’s paintings, pink buds darken and coagulate into a crimson that blooms then blushes, seeping into hues of shadowed purple that linger upon entry to an encroaching nightfall – their vividity renewed in nocturnal sprigs of yellow blossoms, their warm glow scattered amongst the darkness.

Upon perceiving these flowers, elusive in blooming brightly, then fading quietly when enveloped in shadow, I am reminded of Emily Dickinson’s poem Aurora, where they write,

‘My splendors are menagerie;
But their competeless show
Will entertain the centuries
When I am, long ago,
An island in dishonoured grass,
Whom none but daisies know.’

The pale petals of Mozqueira’s painted camellias shimmer softly as moonbeams. Their transparent surface burns gently in yellow, reflected and refracted by the stamen, its slender shape swollen in pollen. In voicing an intention for their paintings to be imbued with meaning through a beauty characterised by their capacity to live alongside us in our homes, Mozqueira asserts “I want people to live with them”. The camellia evokes the daises of Dickinson’s poem, a retainer whose membrane remembers the bodies that live and lie amongst them. In their music video for Good Thing, Maple Glider softly croons “so draw your lines upon my skin” as the camera lingers on a carpet, its surface imprinted by an undetected light source, the shadows of silhouetted plants swaying slightly in their framed window of light. Mozqueira’s crafting of light demonstrates its power in being renewed in continual growth. In living beside these works, we become similarly conscious of the light that visualises its own traces upon our bodies. Its beauty is actualised through each painting intricately invoking and orchestrating a heightened contrast in a duet between illumination and its shadow. The oil paint is layered to impart a light that gently gleams in each crevice of the clustered petals, it is an ignition that is never stagnant, nor still.

In Sofia Coppola’s film Marie Antoinette, the titular Queen of France, distressed by the contents of a letter their mother has sent them, slowly slides down a wall they have pressed their figure against. Its wallpaper is crowded with flowers, and like the canvas of Mozqueira’s paintings, the blooming of their twirling bodies is seemingly apprehended in its’ surface, their intricate detail magnified as the camera, and our gaze, inches closer. The silk of Antoinette’s dress mirrors the imprinted floral pattern, its frame sinks to the floor in folds that unfurl softly. Such movement mirrors the gestures of Mozqueira’s painted roses, their heads bowing gently in darkness, to then outstretch towards the light layered into their kaleidoscopic petals. We can layer or overlap our own bodies upon their entangled anatomies, to live beside them in sharing the light they emit and admit. A camera catches light in redirecting it to a distinct point in crafting an image. Mozqueira paints from photographs, and similarly, uproots the image in its transferral, until the movement of each flower, reaching and retracting from the light layered carefully into each painting, surfaces. Light, in Mozqueira’s paintings, is in constant emergence. It is brought forth and is propagated to emphasise each floral form, and the beauty of such an exchange is that it is always rendered to us, in renewal.