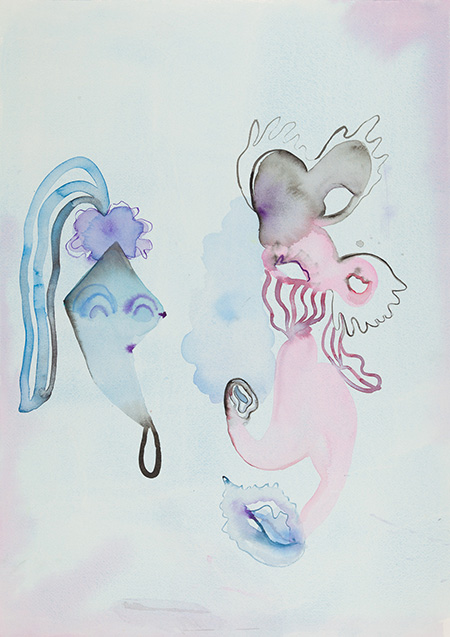 Watercolour and gouache on paper

Volta is made up of two strands of Marynowsky’s work: the watercolour and gouache on found photographs and the more automatic, stream of consciousness paintings based originally on small doodly sketches. Both forms of work share Marynowsky’s fantastical approach to the world. Like the Surrealists, or perhaps even more the Symbolists, Marynowsky’s work synthesises the real and the unreal, the irrational and the rational, into some sort of fantastical hybrid. The images are in a way realer than the real; Marynowsky’s images uncover the psychological depths, the hidden histories and literary tropes that surround images of women.

Marynowsky has chosen to focus on the female nude in this exhibition, a traditional genre in need of relooking. The poetry in the work in Volta is largely a personal one. The green skin, the many eyed cloaks, the long hair like extrusions are all part of Marynowsky’s store of metaphor and picture making. This symbology is still in the end uncertain and open, and Marynowsky works hard to not let her images foreclose.

So in the photographic material, Marynowsky in this show has chosen the clichéd nudes found in a 1930s naturist magazine. This movement is wholly modernist and earnest and sought, in the post war period, to reassert humanities beauty and power in the world. The Australian surf life saving tradition also responded strongly to these imperatives. Marynowsky has chosen this images to shift their register. The skin is now otherworldly and the faces erased. The approach is currently also able to be seen in a lm work at Goulburn Regional Gallery. Scratching directly on the lm stock of the ‘Pretty Woman’ lm trailer, Marynowsky directly intervenes into the movies narrative and assumptions around the lead character.

I have most commonly focused on Marynowsky’s poetic language, her playful use of images and tropes. An extension of this is to wholly focus more on Marynowsky as a deconstructionist. Jacques Derrida, in his idea of erasure, borrowed form Heidegger, or sous rapture, highlighted that although we must use words to be understood, these words, or signi ers, are always also never fully able to grasp meaning. It is better to see words in this tension between their ability to make concepts and things present while at the same time highlighting a certain absence.

This is what is always happening in Marynowsky’s work, the original is presented sincerely and usually with some sort of strong connection to the artist, and it is then interrogated and questioned. The work is put into a new context and its meaning is shown to be contingent. In this show the meaning of womanhood is placed under a deconstructivist feminist critique. The images feel soft and intimate in places but underlying them are other anxieties. Is the erasure for example by the big hair a positive or a negative? Is this a masking and a veiling or a monstrous powerful force? It is potentially and in my mind clearly both.